Pond lotus belong to the genus Nelumbo. There are two species: Nelumbo lutea, the American lotus, and Nelumbo nucifera, the Asian. The latter is also referred to as sacred or Hindu lotus. There are many cultivars of Nelumbo nucifera.

The "Lotus" name:  It is important to note that there is a plant genus named “Lotus”, but the species it contains are legumes, which are unlike and unrelated to Nelumbo Lotus, and of course, unlike anything we sell. In keeping with the generally accepted practice, this website will occasionally use the shorthand term Lotus when referring to Nelumbo Lotus.

Lotus Flowers may be classified by the number of petals. Single blooms have 25 or fewer petals, semi-double have 25-50, and doubles have more than 50 petals. Flower colors include pink, red, white, and yellow. Additionally some are referred to as “changeable” with colors changing from pink to white over the days it is in bloom. Others, called “versicolor”, may have two colors present at the same time in one flower.

Lotus flowers generally open early in the morning on the first day of bloom and close around noon. The next day they remain open for 5 or 6 days, dropping the petals on the last day. If the stem is not cut off the seed pod will develop and eventually tip toward the ground, shedding seeds.

Lotus Leaves are round with smooth edges, ranging from small to over 2 feet across. They are green or blue-green and water resistant. Water rolls off the leaves like mercury. Research is being conducted to learn how this “lotus effect” may be applied to industrial surfaces that must remain clean. Some leaves are smooth and others feel like suede but, regardless of the surface texture, water still beads and runs off the leaves.

The first leaves to form in the spring are “coin” leaves that float on the water surface. As the plant matures new aerial leaves emerge and rise above the water.

Lotus stems must never be cut below the water line as the stem is a conduit for the exchange of gases. To view this in action a stem and leaf may be cut off above the water line and the leaf placed under water. Small air bubbles escape from the area where the stem attaches to the leaf. 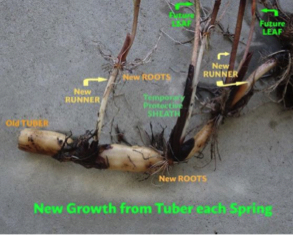 Lotus Tubers resemble a string of light tan to white sausages. The nodes or constricted areas between the sausage links are the origins of the roots, leaves, and flowers. New runners will become the tubers of the next year. The growth tips are very fragile and if damaged the plant may not grow. The growth tips that will become stems are covered with a black sheath that will drop away on its own. Tubers grow aggressively and should not be planted in public waterways.

Lotus plants require 5-6 hours of sun daily and a consistent temperature of 75°-85° F for 3 months to bloom. They also require frequent and heavy fertilizing along with enough water to keep the soil wet.

Lotus grooming is usually minimal to maintain appearance. If you want the decorative seed pod, do not remove the stem after the flower stops blooming. If you don’t want the seed pod, cut the stem above the water line.

Lotus pests are usually limited to aphids when new growth is tender in the early spring. Wash the aphids off with a steady stream of water or wipe them off. Sometimes worms may eat large holes in the leaves. A quick inspection under the leaf may reveal the worm. Brush it off and step on it or relocate it to another host.